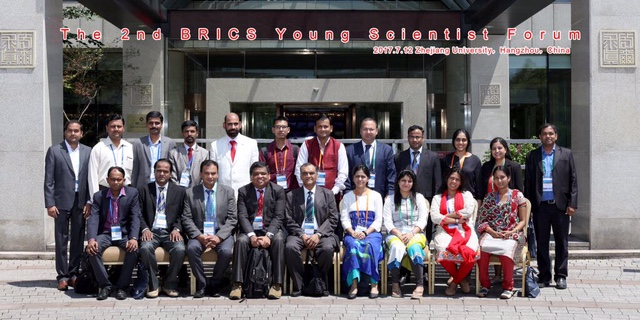 Zhejiang University being the host this year. Zhejiang University is ranked in Top 5 in China and hosts its own hospital “The First Affiliated Hospital” of Zhejiang Province in China, which is again ranked 2nd in the country. Dr Varsha represented the Biotechnology forum out of two categories namely, energy and materials. The delegates were made to present their ongoing projects and secured possible collaborations among the BRICS nations. The idea of the BRICS YS forum was adopted at the 2nd BRICS Science, Technology and Innovation (STI) Ministerial Meeting given by India to the BRICS Ministers, and further approved in Russia.
All top 20 delegates from BRICS nations were selected and recommended first by their respective science and technology ministers. This was followed by the funding government parties of the five BRICS nations. In the third selection round the final list of participants were submitted by BRICS STI focal point and the host country.
Following the 2nd BRICS Young Scientist Forum 2017, 17th July and 18th July will witness another ministerial meeting of all BRICS nation followed by the BRICS Summit in September 2017. The ministerial meeting will now further discuss the Projects presented by the scientists and follow their work for further upliftment, mentoring and support for a more strategic research. Dr Varsha is honoured to be a part of this forum and to represent Chitkara University for which the Chinese govt. officials have offered her to initiate a possible collaboration and funding known as the Indo-Chinese Health endowment fund involving her work.